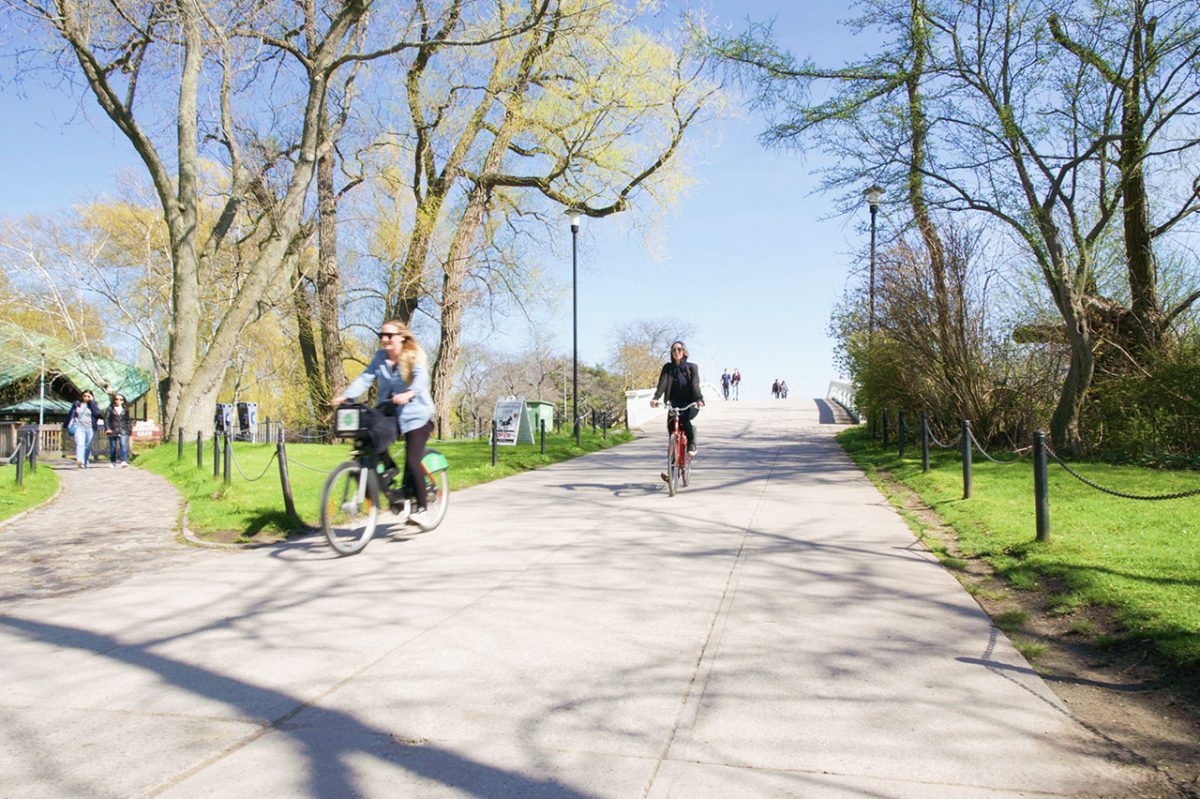 There are parts of Toronto that are meant to be explored on bicycle, especially during the summer. Whether you prefer taking in nature or taking in the skyline, mountain biking through the trees or riding casually along the water, here are five bike rides that highlight the best of Toronto and offer some great photo opportunities along the way.

Hop on the Humber River Trail for a family-friendly ride through Toronto’s west end. With more than 10 kilometres of paved paths, this easygoing trail that runs from Steeles Avenue south to the lakefront offers city and nature views while winding through various parks.

Where to rent: If you begin your ride at the lake, you can pick up a Bike Share. Sweet Pete’s in Bloordale or MetroCycleTO in Parkdale are nearby rental options as well.

Part of the larger Waterfront Trail, the Martin Goodman Trail has a designated bike path that runs alongside Lake Ontario from Etobicoke in the west to Scarborough in the east. William G. Davis Trail in Trillium Park is a beautiful new addition on the way in Ontario Place, and the green space honours First Nations’ heritage and celebrates Ontario’s natural resources. A leisurely ride through the park also offers a breathtaking view of Toronto’s skyline.

Where to rent: Bike rental options along the trail include Bike Share stations, Wheel Excitement on Queens Quay, or GEARS in Canary District.

Crothers Woods is a popular area in the Don River Valley for mountain bikers, hikers and bird-watchers alike. This area has a paved path for family-friendly rides, and narrow, winding dirt trails through the trees for advanced bikers.

Where to rent: The best option for renters is Sweet Pete’s, who have a location just south of the Bayview Road Trailhead in Evergreen Brick Works.

Also known as the Leslie Street Spit, Tommy Thompson Park is a conservation area popular with cyclists, runners, and bird-watchers. The park is a peaceful getaway within city limits, and the 5-kilometre stretch ends with a lighthouse at the southern tip. Don’t forget to bring your binoculars! Over 300 bird species have been spotted in the park.

Where to rent: Stop by Velotique’s bike rental station in The Beaches or pick up a Bike Share at the park entrance.

For the best view of the Toronto skyline, escape downtown and head to the Toronto Islands for a casual bike ride. You can easily spend a day enjoying the family-friendly, car-free paths with plenty of spots to stop along the way, including beaches, gardens and inlets that offer skyline views in the distance.

Where to rent: Pick up a Bike Share on Front Street before boarding at the Jack Layton Ferry Terminal, or head to Toronto Island’s Bicycle Rental on Centre Island once you arrive.