Montreal Travel Diary | What to do in Montreal for 3 days on re:view 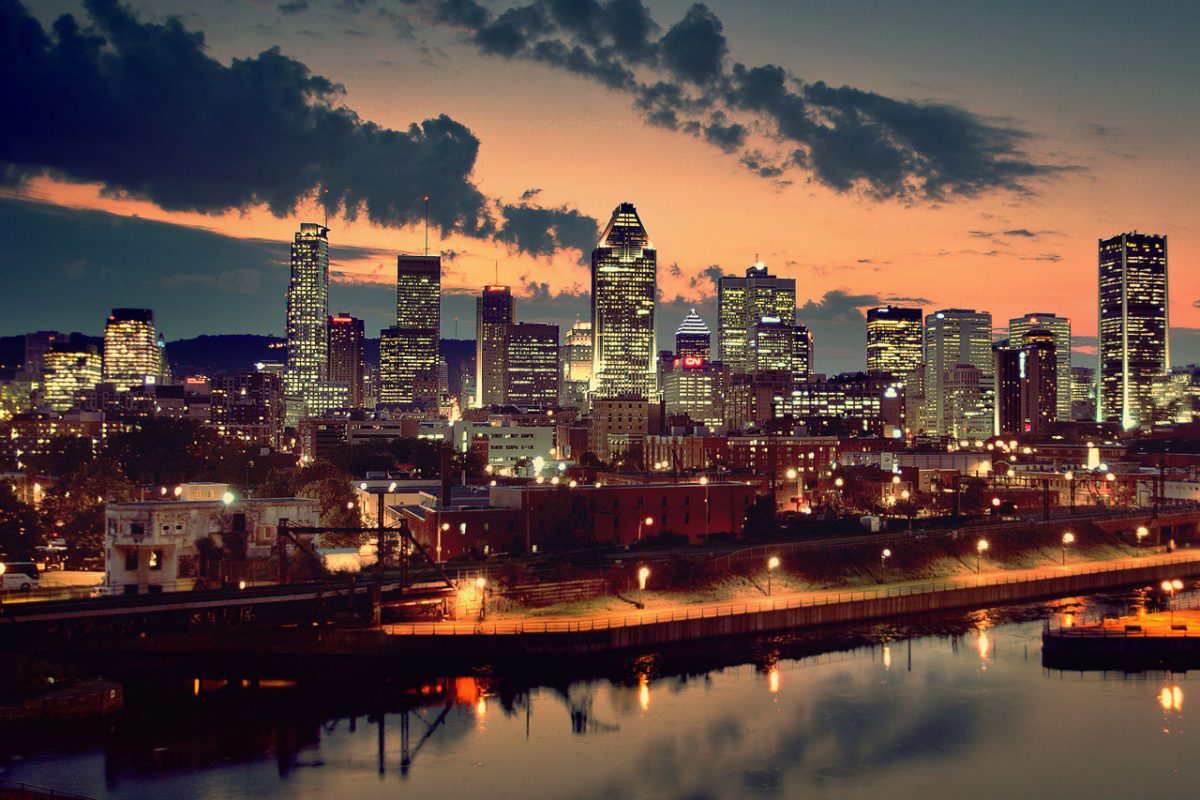 “We could live here, right?”

We find ourselves saying this, again and again, repeating it like a mantra with every delicious sandwich, every discovery of a charming, dimly-lit bar, every trip on the delightfully 1970s brutalist metro. Granted, it’s a mild November, and visiting somewhere for the weekend is nothing like living there. Still, Montréal is the kind of place that makes you wonder. 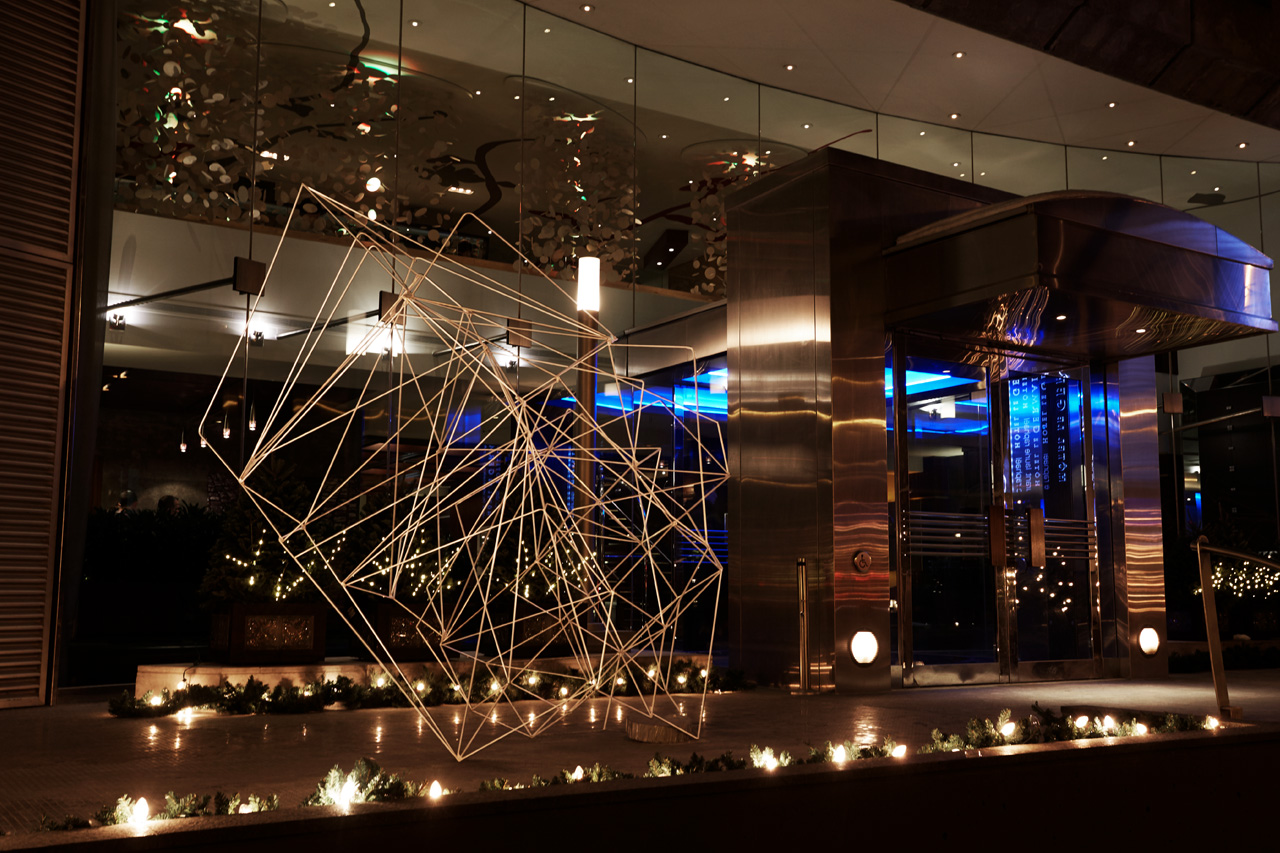 Waking up sprawled across a downy, king-sized bed at the Hotel Le Germain will put anyone in an expansive mood. “We should really get one of these,” I say to Elizabeth, who has long endured my night-thrashing and cover-stealing. She agrees immediately. A morning spent luxuriating over room-service breakfast in Le Germain’s fluffy robes is tempting, but instead, we down a quick in-room Nespresso and head out into the crisp, cool day. We’re in search of adventure and inspiration, but first, brunch.

Arthur’s Nosh Bar is on a food-centric block of Notre Dame (its neighbours are a ramen joint and a Mexican sandwich shop) in the trendy St. Henri neighbourhood. Now in its second year, this homey diner specializes in Jewish deli classics modernized for the Instagram and rosé wine slushy crowd (or as Arthur’s calls it, “Frosé”). 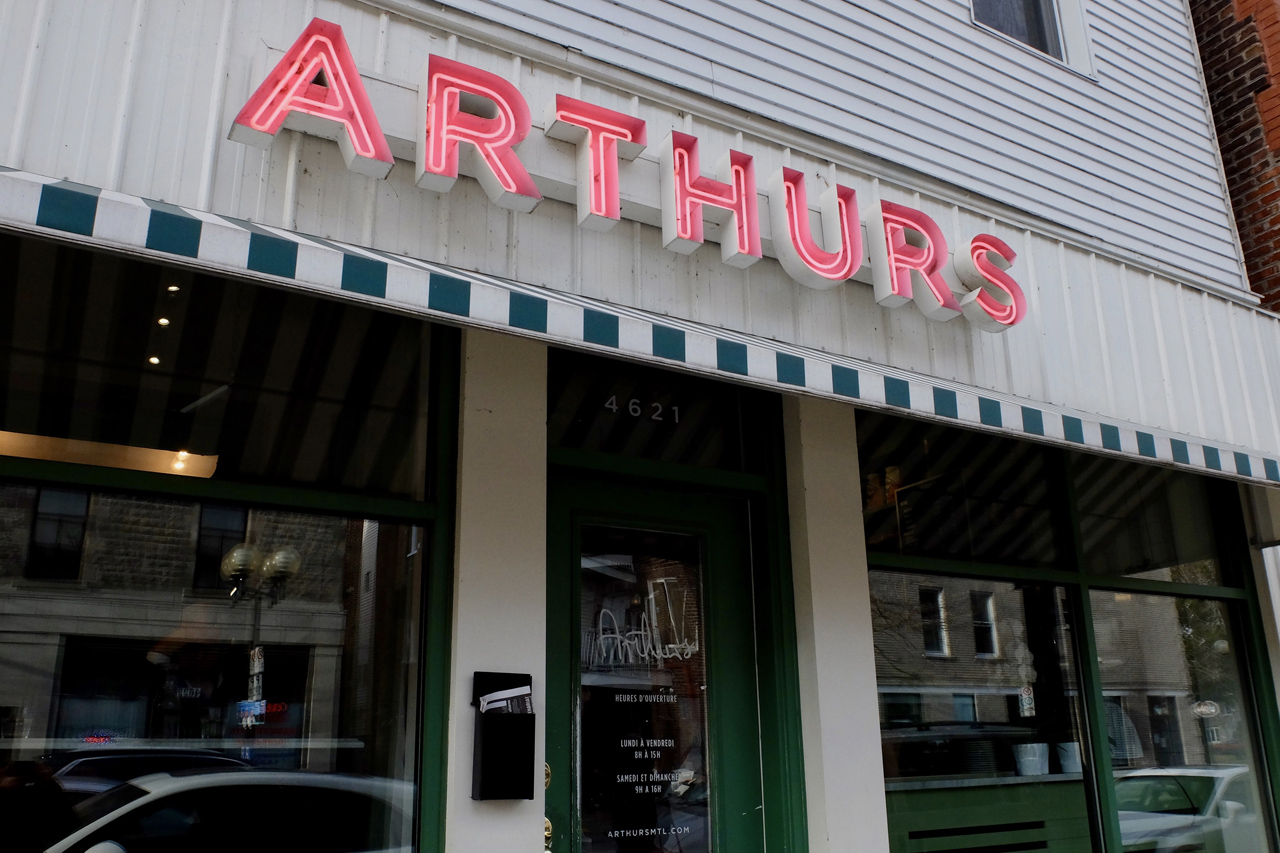 Everything on the menu looks good, but I’m immediately drawn to the “McArthur,” a deli-fied take on a Big Mac, featuring schnitzel, challah, mayo and a tart kosher pickle. The sandwich doesn’t disappoint, but I’m wholly unprepared for what comes next: a stack of cottage cheese pancakes, otherworldly in their lightness and fluffiness, swimming in a sticky lake of maple syrup. “It’s a family secret recipe,” says owner Reagan Steinberg with a proud grin. I try to avoid waiting in line for brunch at all costs, but I’d gladly make an exception for the food at Arthur’s any day of the week (and there is usually a wait here). Those pancakes are worth a trip to Montréal on their own. 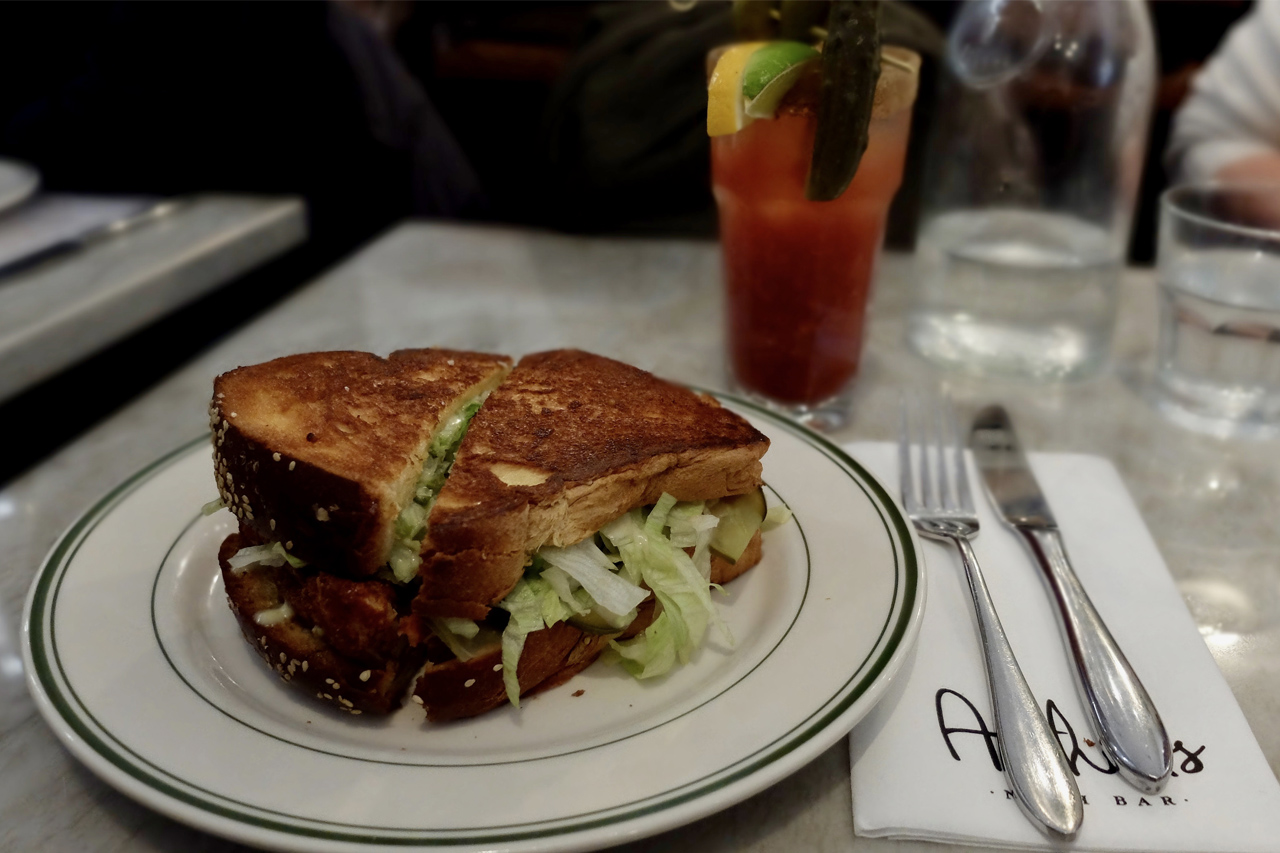 Pleasantly fortified with schmaltz and Caesars, we head back downtown to the Musée d’art contemporain de Montréal for a dose of local culture. Leonard Cohen is one of Montréal’s greatest exports since chewy bagels. Among the many posthumous tributes to the singer and poet is “A Crack in Everything,” a new exhibition featuring homages by dozens of artists, musicians and filmmakers. At Janet Cardiff’s “The Poetry Machine,” we take turns playing an old organ, each key programmed to speak a different Cohen poem. We sit on couches in a darkened room letting Lou Doillon’s cover of “Famous Blue Raincoat” wash over us from speakers on every wall, and could have happily spent the rest of the day there, submerged in the music and poetry of Montréal’s favourite son. 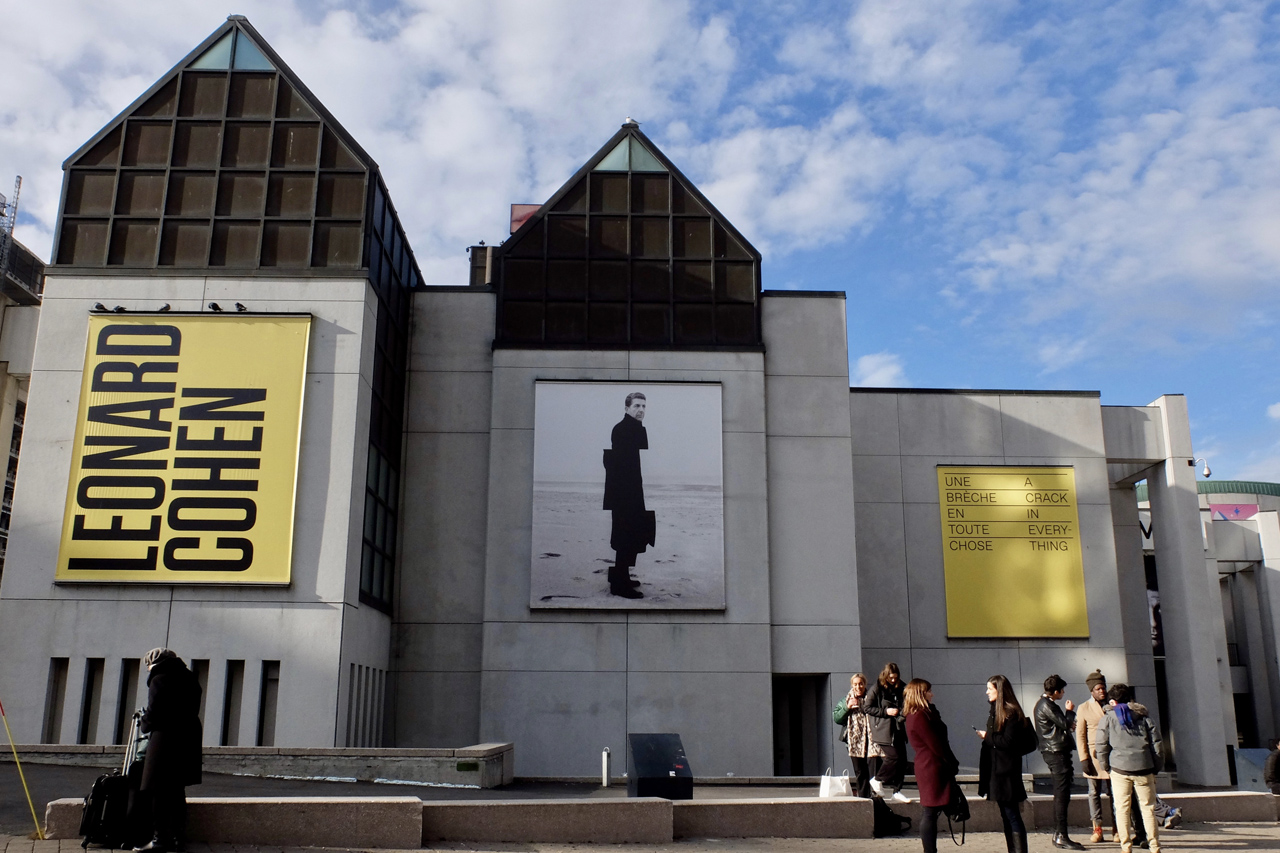 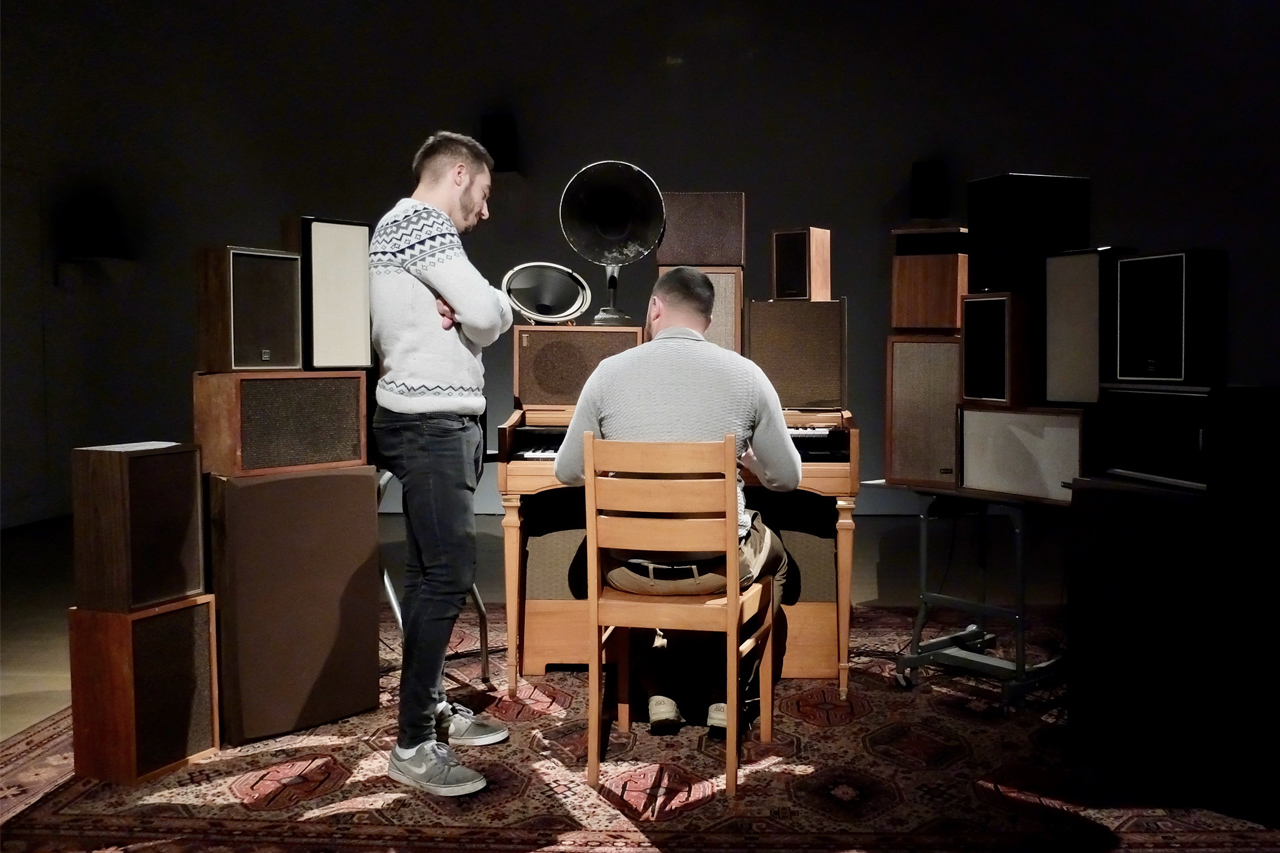 After a quick stop for sustenance at Café Osmo, a quirky coffee shop with raw concrete walls, colourful modern furniture, and domed plexiglass skylights, we hail a cab north. 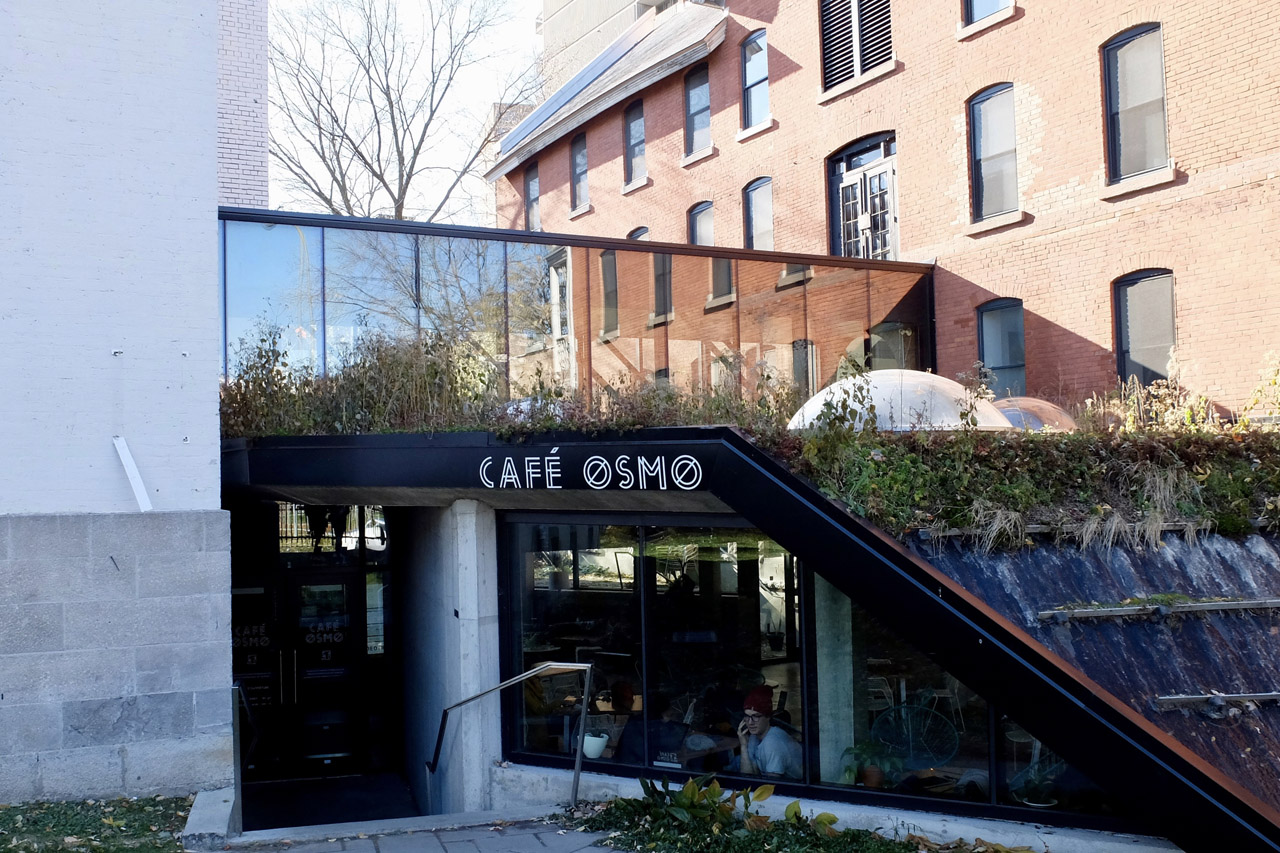 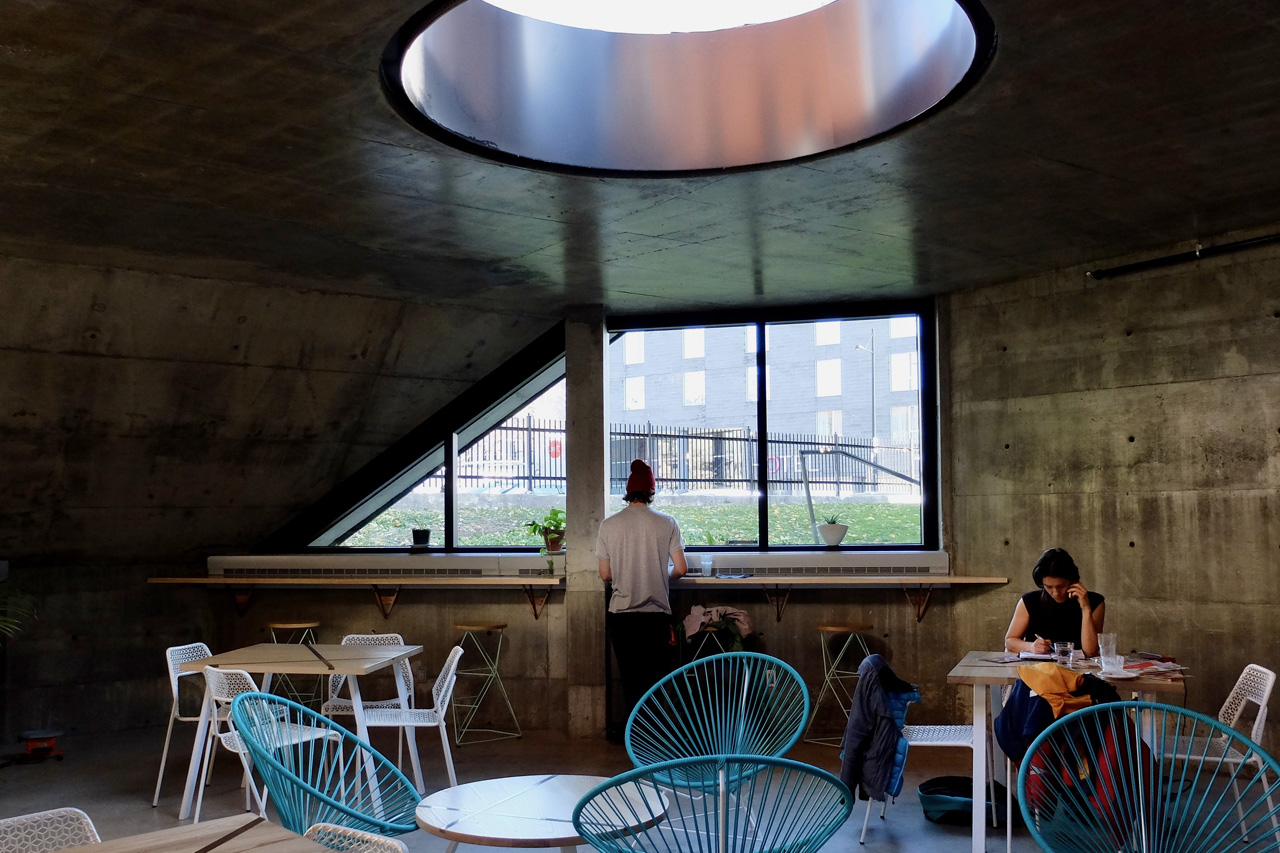 While the Marché aux Puces St-Michel looks like an abandoned, small-town hockey rink from the outside, those brave enough to venture inside will be rewarded with treasures. Here, chatty old francophone men preside over display cases full of original Nintendo games, shelves of Tintin comics, and acres of porcelain cat statues. Elizabeth poses for a photo next to a five-foot-tall framed photo collage of John Travolta and we haggle ourselves an excellent deal on a set of pink, Pyrex Fire King bowls. 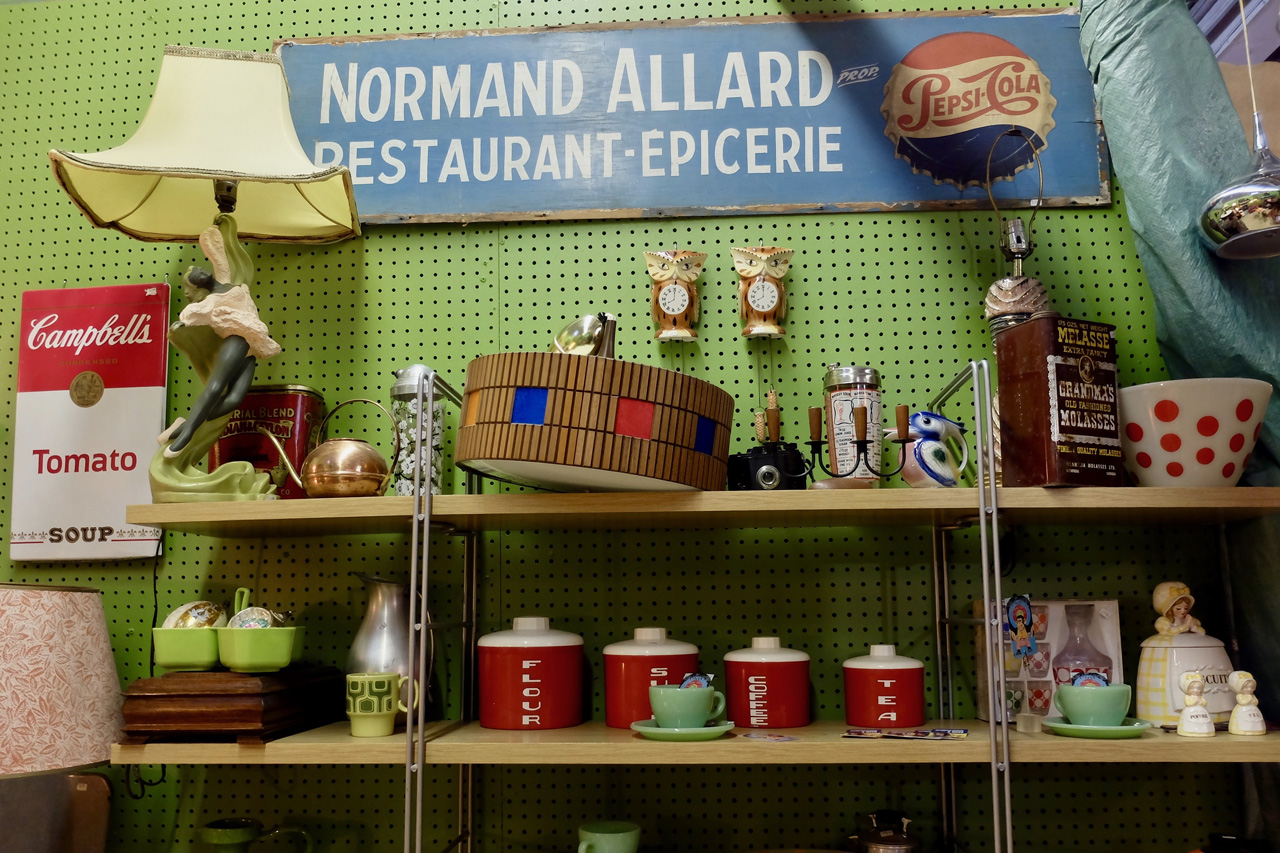 The doorman at Le Germain greets us as we return to drop off our flea market haul and change. After a long day of roaming, we are more than ready for cocktail hour and dinner, so we hop on the metro to Buvette Ludger, a place well-equipped to provide both. 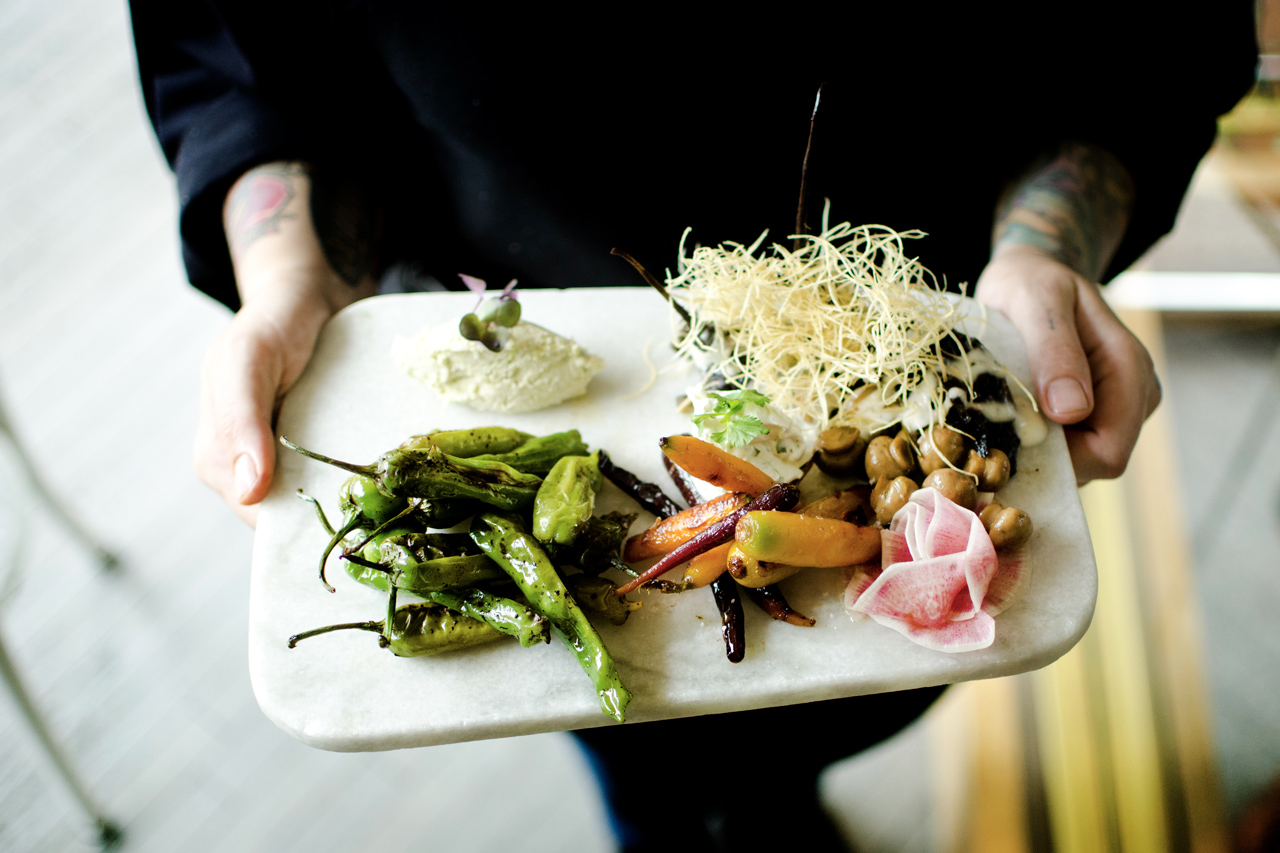 This modern brasserie specializes in contemporary dishes with a Canadian touch, like house-made Québec rabbit terrine with ice cider jelly and an arctic char gravlax with miso cream and pine nuts. They also operate Magdalena next-door, a dimly-lit bar adorned with tropical plants below an impressive solarium ceiling. We toast the day’s adventures over glasses of Crémant de Bourgogne at Magdalena, and the conversation naturally returns to the fantasy of our imagined lives in Montréal. We could live here, we’re pretty sure, in some high-ceilinged, under-priced apartment, subsisting on smoked meat sandwiches, foie gras and the occasional steamed hot dog. Until then, it’s only an easy flight away on Porter. 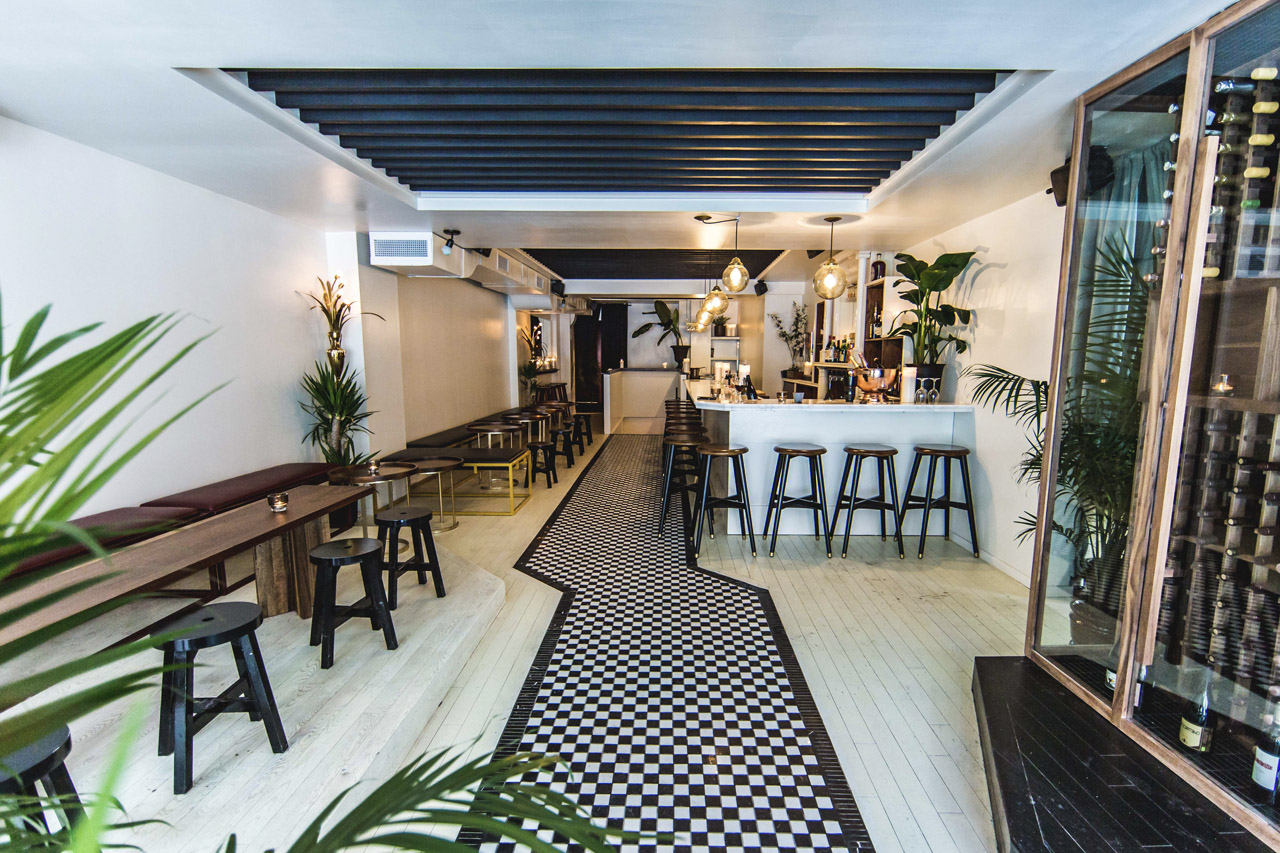