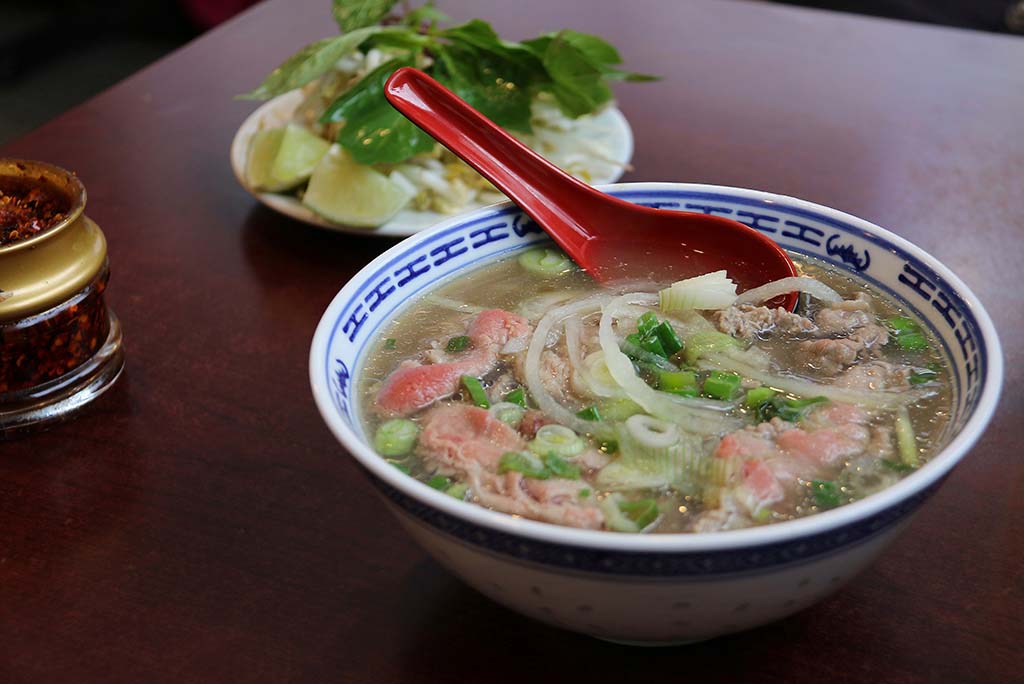 The much-loved bowl of pho that you enjoy on a cold day comes from the crossroads of Vietnamese and French cuisine. Pho has been thought to derive from pot-au-feu, the typical French beef stew. This European touch on taste buds extends to the pronunciation as well—’pho’ rhymes with ‘feu’, French for ‘fire.’

Pho’s origin dates back to around 1900, which is relatively recent within Vietnam’s long and rich culinary tradition. Before the French colonization, Vietnamese cuisine featured pork and poultry as its main protein sources. The French influence increased the demand for beef, which in turn increased its availability.

It is thought that pho originated in the city of Hanoi in Northern Vietnam, but is widely available  throughout the country nowadays. The Vietnam War and the exodus of Vietnamese refugees all over the world spread pho’s worldwide popularity.

We’ve gone into the dining rooms of multiple Montréal pho restaurants, and delved into special flavours for you. Most of the restaurants listed below open at 10 a.m., and stay open all day. It’s a deliciously slurpy, splashy soup, so get your napkins ready and dive in!

Located on an industrial street in the city’s east end, Pho Nam Quan is not the easiest establishment to reach. Yet, the small semi-basement dining room is always crowded. Visible from the dining room, the gigantic pot of beef bone broth simmers for 7 hours before being served, with a variety of toppings from paper-thin rare beef slices to tendons, tripes and meatballs. This family has their own pho recipe and it’s truly exceptional. Pho Nam Quan also serves a spicy version of their soup made by adding chillies and aromatics to their basic beef broth.

Pho Ngon’s owner spent many years working in his friends’ pho restaurants until he opened his own. The 15-year-old restaurant serves up to 300 bowls of beef and chicken-based soup on any given weekday. The broth is flavourful but not too rich, the noodles toothsome and the rare beef pho is capped with a generous heap of paper-thin slices of lean meat. The side flavourings include a fresh, bright red, bird’s eye chilli and a sprig or two of saw tooth herb or culantro (a much more pungent alternative to cilantro). On weekends, Pho Ngong serves bún bò Huế (bún bò soup from the city of Huế), a rich beef broth soup seasoned with lemongrass, fermented shrimp and chilli oil, and served with rice vermicelli noodles.

Nguyen Phi is often cited as the best pho restaurant in Montréal, and with good reason. This family-run restaurant has some of the friendliest staff who are always eager to recommend their favourite soup. The current owner’s parents operated a pho stand in northern Vietnam when he was a child. He grew up around the steamy broth simmering on the stove all day long. It was only natural for him to want to recreate that ambiance in Montréal. His slow-cooked family recipe, bursting with taste and fragrance, has been bringing joy and comfort to his clients for the past 18 years.

Pho Tay Ho has been among Montréal’s most beloved Vietnamese restaurants for over 25 years. This family-run business is always buzzing with enthusiastic chatter from a permanently-filled room of happy diners. Don’t be fooled by the “beef” section on the menu since the pho here is and always has been, chicken-based. The rich chicken bone broth goes through a 16-hour process of simmering, tending and cooling before being served. Their dac biet pho (or specialty combo pho) is a rich and aromatic bouillon generously topped with thin slices of rare beef, fatty slices of well-done flank steak and beef meatballs. The pho ga tai with slices of chicken and rare beef, is the ultimate soup to order here.

This causal spot in Saint-Henri has the stellar veteran pho family of Pho Tay Ho behind it. In fact, the Pho Tay Ho family’s youngest daughter opened this canteen to cater to a younger clientele in a hip neighbourhood. This is the only restaurant on our list with an Instagram account and also deviates from the old school bare dining room décor to offer a trendier look. But trendy doesn’t mean less tasty. The pho ga (chicken pho) here is based on the Pho Tay Ho family recipe, which the owner has tweaked and added her own twist to. The chicken broth simmers before being cooled down, then reheated and served. The result is an unctuous bowl of soup that is perfect on its own or topped with a fried egg.